In short, the city’s student population, which takes the aesthetic German heritage and blends it with style and enjoyment. German culture is so entrenched that Oktoberfest is Sibiu’s most celebrated event and the most anticipated day of the year. You can read about our Oktoberfest adventure here.

Sibiu is the richest and largest of the 7 cities (Siebenburgen) founded by the German Saxons in Transylvania. Until the 1940s, the majority of the population was German. This German heritage has completely shaped the culture and architecture of this city. Since the first university opened in 1920, the city has had a significant student population. It is called the biggest castle of culture & art in Romania. In 2007, it was chosen as the European Capital of Culture together with Luxembourg.

Although the sweet restaurants and cafes nestled in the Saxon architecture and the pubs crowded with young people in the evenings bring dynamism to the city, the streets are generally peaceful. It was chosen as the 8th most peaceful city in Europe by Forbes Magazine.

You can think of the city as a two-story settlement, the top and the skirts of the plateau. There are medieval houses on the outskirts, and buildings built between 1600 and 1800 on the plateau. The city is pedestrian-friendly. It is super enjoyable to wander through the centuries by going up and down the stairs between the two floors, and to relax in bohemian cafes.

Sibiu is 20 km from Romania’s famous mountains, the Fagaras Mountains, and is a nice destination to stop by before or after the Transfagarashan road. You should definitely include Transfagaraşan in your plans.

► Before continuing, how to read this article?
This article is one of the subtitles of our Transylvania Tour Program – Budget & Destinations & Tips. That article has all the information you need to make a legendary tour of Transylvania. Also, check out our Romania Travel Guide to see all our recommendations for Romania at a glance. ◄ 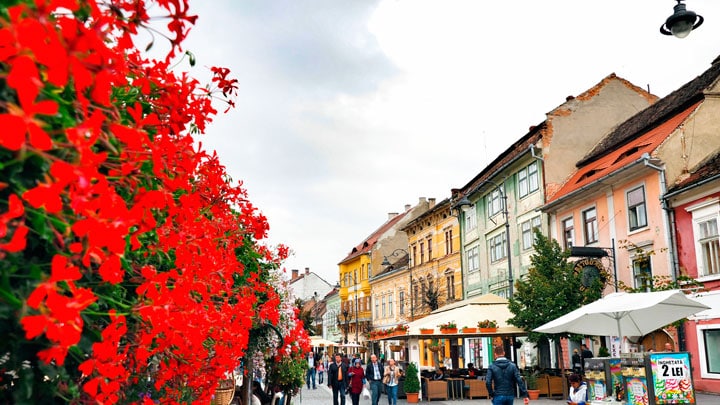 Founded in the 12th century on the site of Cibinium, one of the ancient Roman villages, Sibiu was a trade and craft city protected by high walls and 39 towers, as in other Saxon cities.
Another feature of Sibiu is that the first hospital, school, library and pharmacy in Romania were opened here.
The city, formerly known as Hermannstadt, remained in Romania after the separation of Austria-Hungary after World War I and was renamed Sibiu in 1919.
As in other German cities, the Germans, who were the original founders of the city after World War II, had to emigrate from here.

The main square of the old city is Piata Mare, the Great Square. This is where the markets were established in the Middle Ages, and where the executions were carried out. The 13th-century Council Tower here served as a granary, fire watchtower, temporary prison, and botanical museum over time.

The bridge, dated 1859, is the oldest iron bridge in all of Romania. The bridge was wooden before it was turned into iron. Another name for this bridge is the Liars Bridge. When it was on the throne, the name of Liars Bridge came together with con artists and apprentice lovers who claimed that their love would last forever on this bridge. Legend has it that the bridge would collapse if lied to on it.

We hold on tight in case the Iron Bridge will collapse 😉

Sibiu’s inner city is not very flat. It has beautiful colorful streets with stairway passages and arcs from the 13th century.

Cafe
Cafeneaua din Librarieserves as both a cafe and a bookstore with the popular style of recent times. espresso on the other hand, it is the place for those who love the coffee-dessert duo.

Local Kitchen
Both a wine cellar and a restaurant Crama Sibiu VechiThe most authentic place in Sibiu. The ideal place to taste the traditional Romanian cuisine.

Although it smells a little damp because it is a mahsen, Weinkeller It will delight wine lovers.

An affordable but nice option in Sibiu’s main square. Prices do not include breakfast. Detailed information & reservation

One of the best options for low budget traveler in Sibiu. Including breakfast. Detailed information & reservation

Other Sibiu Hotels and Hostels

in Sibiu ALL HOTELS AND PENSIONS 👉 to see CLICK HERE

WHERE TO STAY IN ULUWATU – HOTELS & VILLAS