THE SECRET OF THE NAZCA LINES & FLIGHT DETAILS – PERU

B.C. 500 – 500 AD We were fascinated by watching and watching the figures that the pre-Incas indigenous communities started to draw in the desert for years. Now, even though others who visited this place said that “it is not worth traveling 145 km just to see this place from the air for 20 minutes”, we were overcome by our curiosity and set off.

Nazca Lines a great source of mystery for humanity. There are still many people who believe that aliens did it or that aliens and ancient humans had some form of communication. Science still has no proven answers, it has theories.

For the first time in 1926, a Peruvian archaeologist Toribio Mejia Xesspe He begins to research the Nazca Lines. However, the figures are so large that the motifs can only be understood when viewed from the air. So the motives are not clear until an airplane flew over them for the first time in the 1930s. who became a pilot in 1941 Paul KosokCoincidentally, when he goes to study the Nazca Lines the day after the winter solstice, he realizes that the sun aligns with the lines at sunset, thus making the Nazca Lines famous as the world’s greatest astronomy book.

Maybe you are reading an information that you can see from the sea somewhere, it is definitely wrong information, keep in mind.

What are Nazca Lines?

The most striking patterns are, of course, animal patterns. Especially spiral tail the monkey, 180 meters giant lizard and with a wingspan of 130 meters South American vulture the most famous. Also, everyone generally to the astronaut likened to owl head man figure also among the most popular figures. Some say this man is a mystical priest with an owl mask on his head. 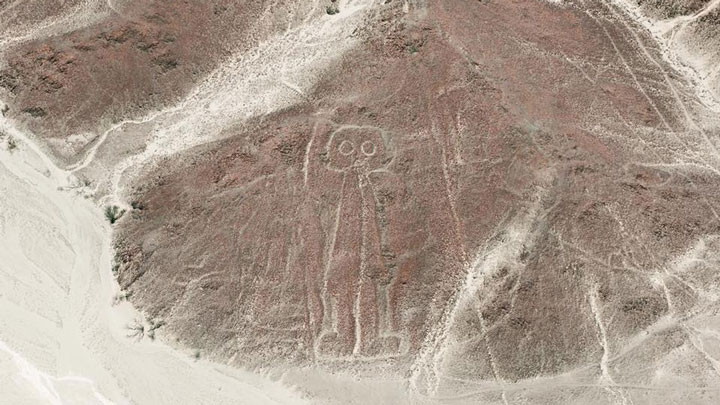 Who Made the Nazca Lines?

living in the area called Pampa Colorada (Red Plain) Natives of the Paracas and Nazca culturesThey drew over 800 straight lines and 300 geometric shapes, and around 70 animal figures concentrated in one particular region, over the course of 1,000 years, on 500 square kilometers of arid rocky area. 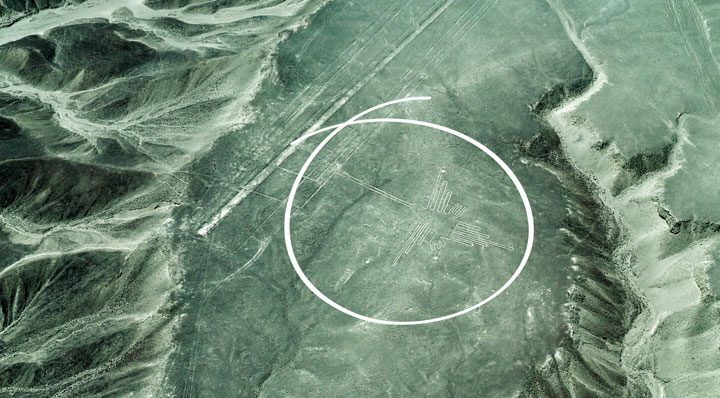 Can you see the hummingbird?

Why Did They Make the Nazca Lines?

kind of Nazca Lines astronomy calendar beliefs that it is, a German researcher who later spent 40 years of his life researching the lines Maria Reich was also adopted. This was the prevailing view until a group of American researchers arrived in the 1970s. Still, this view remains valid, only the framework of the theories has been expanded.

American Johan Reinhardsuggests looking at lines from a wider perspective than includes sociology, geography, anthropology, and ethnography: although the alignments at the midsummer and winter are no coincidence, not all lines point to celestial things, trapezoids and most straight lines are water and water in the desert. pertaining to rituals for agriculture claims to be.

One of the things he bases his claim on is that in an archaeological research in Peru, the spider symbolizes rain, the hummingbird symbolizes fertility, and the monkey symbolizes abundance of water. 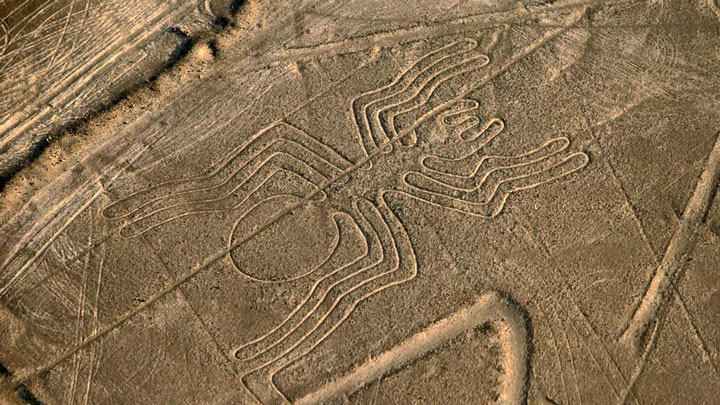 Some complex patterns like spiders, some too geometric patterns such as triangle and trapezoid. The fact that the lines are so dense and some of them overlap, is that they continue from generation to generation. of a long-standing tradition that lasted 1000 years. It indicates that it may be a product.

In fact, behind even seemingly simple figures important astronomy accounts there is. It is estimated that these astronomy calculations were made for use in agriculture. For example, some triangles are thought to point to the place where the sun rises on days when night and day are equal. What many of them mean is unknown and secrets still waiting to be solved. 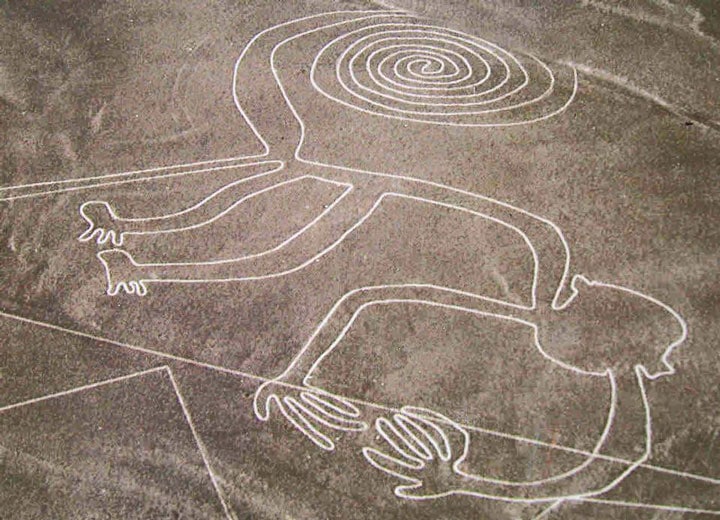 How Did They Make the Nazca Lines?

Although there are some who associate the ability to draw such large designs so perfectly without seeing the total, with aliens, a research team has proven that this was within the human capacity with the possibilities at that time. Using only rope and stakes, a team of less than 10 people was able to finish drawing these complex figures exactly in less than a week.

A fairly stable drawing technique they use it: to excavate the sun-tanned rock surface to reveal the underlying lighter shade of sun. 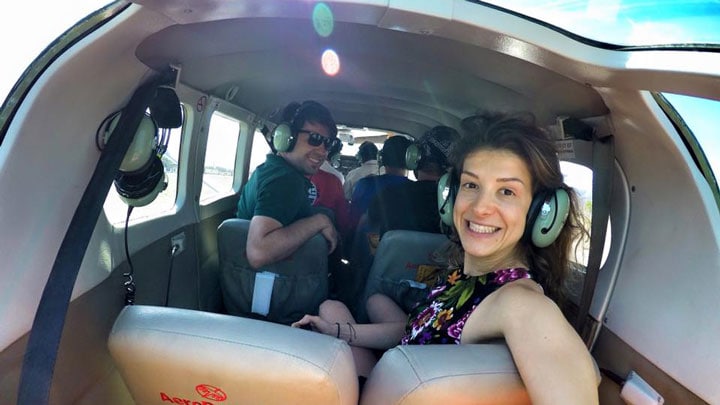 Flights to See the Nazca Lines

They told us it’s not worth it to travel for 2-2.5 hours, they warned us, but we succumbed to our curiosity. We’ll say it’s not worth going to now, but how many writes? 🙂

Namely; to achieve ideal flight conditions. Early in the morning you have to get here. We got up early in the morning from Huacachina to come here, we were sleep deprived, we spent time and money. All over the lines 20 minutes for a flight. We agreed with him, but don’t look at us laughing in the photo, we died on the plane. Although flying early in the morning is the best in terms of visibility and turbulence, we were devastated from swaying. vomit vomit…

It’s not that we were lucky enough to run into bad conditions, that’s how the flight always goes here. In less than 5 minutes, everyone perished. From the first 5-10 minutes of the journey towards the end, we were not in the mood to look at the lines. You’re getting worse if you look down anyway. During the second half of the flight, we only watched the neck of the person in front of us. We were so stunned in 20 minutes that we couldn’t come to ourselves all day. 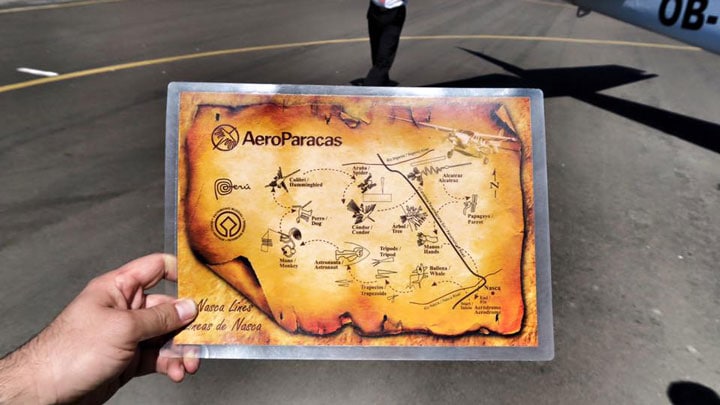 Which Airline Should You Fly With?

There are 3-4 airlines serving here. When two of them collided in mid-air in the past, AeroParacas It was natural selection. 🙂

Keep in mind, do not make a reservation with an agency and do not give any commission for nothing. We went directly to the airport without any preparation. Buying a ticket there directly from the airline 20% more affordable. We were flying 20 minutes after landing. It was that easy. 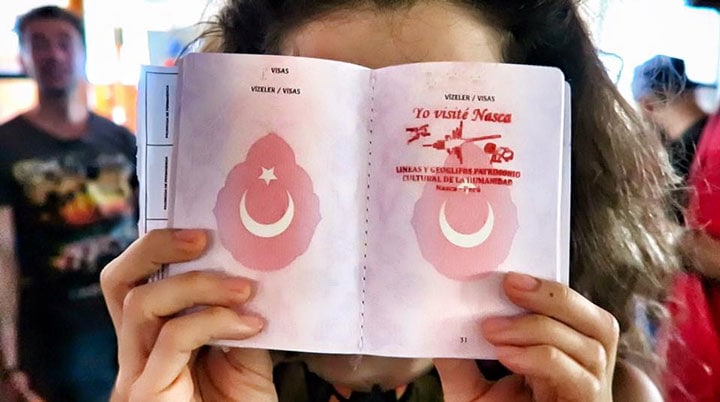 We also had Nazca stamped on our passports!

Nazca is one of the most important stops of the bus network in Peru. For this reason, there are buses from almost all major cities. Since Nazca is a small city, there is no bus terminal here, but all companies are located at the main intersection of the city. Óvalo de Nazcaclustered in .

from Ica Small buses called collectivos leave. These operate with the dolmus logic. It takes 2-3 hours. At the same time, there are buses from Flores, PeruBus and Soyuz companies that leave every half hour. Prices for both options are around 12 soles.

from Cuzco and from Arequipa There are night buses here. Peru Hop, The Journey takes 14 hours from Cuzco and 9 hours from Arequipa. There are sometimes delays during the rainy season. Prices range between 60-180 Soles. If you take the 16.00 bus from Cuzco, you can be in Nasca around 06.00 in the morning and have breakfast and then take a taxi to the area where the planes take off (4km from the center) and take a Nazca Line flight in the early hours.

From Lima to Nazca 8 hours by bus. Peru Hop (the most expensive), Cruz del Sur, Oltursa or Ormeno companies have flights here every day. Prices average between 50-90.

If you’ve decided to fly over the Nazca Lines, definitely emadur We say take an anti-nausea pill like this.

If you come here, it’s two hours away. huacachinaYou must stop by! A tiny hallucinatory oasis in the middle of the Huacachina dunes. Sandboarding, the bikini brother of snowboarding, is done here. in our opinion sandboarding One of the best things to do in Peru. 😉

For more information about Peru PERU TRAVEL GUIDE You can check our page.